Christmas Comes A-Calling At The Richmond Household…And It’s Not The Only Visitor!

Winter, Year 4
“Wow, you’re getting so big!” Daisy exclaimed. She was visiting her sister Hollie and couldn’t believe how big Hollie’s bump was now. “When are you due?”
“Just after Christmas. Not long to go!” Hollie said, cheerfully. “I’m getting so uncomfortable now, so I must admit I’ll be pleased when he’s born!” She excused herself and left the room.

When she returned, however, it was to see her husband and her sister flirting outrageously. “Ethan?” she said, pain evident in her voice.
“Oh shit.” Ethan excused himself and nudged Hollie into the kitchen. “Hollie, I swear I’m sorry. She started coming on to me and-”
“And you were too weak to say no, I know.” Hollie shook her head in despair. “She’s my sister, Ethan. She’s married and so are you. What the hell are you doing?”
“I swear, it won’t happen again, Hollie.” Ethan promised.
Hollie felt crushed. After Daisy bid a hasty retreat, Ethan turned and pulled Hollie into a hug. “Hollie, I’m so sorry. I really won’t let this happen again. I promise.”
Hollie didn’t feel entirely convinced. Ethan had hardly looked uncomfortable when Hollie had re-entered the office and Daisy had definitely sounded like she was really getting into the swing of the flirt. Something about the situation made Hollie very uneasy.

“So what the hell were you playing at last night?” Hollie asked furiously. Daisy had called round to see her and this time, Hollie wasn’t holding back. “You’re married, in case you’d forgotten. You snuck away and married Gerald in an elopement in Sulani. So what the hell were you doing flirting with my husband?”
“Hollie, I didn’t mean any harm. Ethan’s so sexy and when he started flirting, well, I couldn’t resist.” Daisy blushed.
Hollie looked uncertain. “Ethan…Ethan flirted first?”
Nodding, Daisy looked at her sister closely. “Are you okay?”
“Yeah.” Hollie forced a smile. “Yeah, I am. Maybe I overreacted.”
Daisy left shorty afterwards, muttering something about needing to send out a shipment. Hollie dropped to her knees to play with Jenna for a bit. There was something surprisingly soothing about playing with her toddler daughter. Even when it felt like the world was crashing down around her.

“Well,” Emily breathed. “This is certainly a muddle.”
Hollie and Emily had met up at the Cove Community Centre to watch their little ones. Hollie needed a friend to talk to; somebody objective who didn’t really know either of them well enough. “I know. I just don’t know which one to believe. Ethan insists Daisy flirted first and Daisy insists Ethan did. I know Ethan can be a bit of a flirt but so can Daisy.”
Emily sat thoughtfully for a bit. “Do you think it’s possible it really was innocent? That there really isn’t anything in it?”
“I don’t know,” Hollie said, shaking her head. “It seemed fairly deliberate; as soon as I’d gone out of the room.” She sighed. “Oh, maybe I’m just being paranoid.”
Emily gave a small smile. “Perhaps. Keep an eye on things though, Hollie. Don’t assume anything.”
Hollie nodded again and the women gathered their belongings and children and set off for their respective homes. Instead of heading straight home, Hollie detoured instead to the Early Learning Centre in Windenburg. She loved taking Jenna there and Emily agreed to meet her and take her toddlers along too. Jenna hadn’t really played with too many other children before, so Hollie thought it would be good for her.
Jenna became uncharacteristically shy around Sayer.

Hollie’s back gave a twinge as she straightened up. Now more than ever she was ready to have this baby but she still had a little while to go yet. She also felt a twinge of panic whenever she thought about the baby. How were they going to manage when she went back to work in the new year? With Daisy living with Gerald, the original plan had fallen into disrepair and Hollie had no additional childcare plans. She could focus on tutoring online; but would it be enough? Meanwhile, Ethan sat in the canteen at Larry’s Lagoon at Foxbury. He had a class straight after work and had settled down to get some work done before heading home. He was feeling a little embarrassed by a ‘visitor’ he’d had at work. He wasn’t sure if it was in response to a new colleague, or whether it was because he’d been inadvertently thinking about Daisy before he’d left the house that morning.
Either way, it was embarrassing because whoever was responsible, it wasn’t Hollie and a large part of Ethan felt guilty for that. He’d just finished his assignment and had pulled his jumper over his head when Riccardo came up to him and smiled. “Hey, Ethan! How’s it going?”
Ethan and Riccardo weren’t exactly friends but because Ethan and Jared had been at Foxbury together before, Riccardo had taken to striking up a conversation with him from time to time. Ethan didn’t mind; he didn’t really have much in the way of a social life and Riccardo was easy to talk to.
“Not great, really.” Ethan pulled a face. “Just some problems at home.”
“Ouch.” Riccardo winced. “Not good, especially with the holidays coming up.” He paused and regarded Ethan for a moment. “You can talk to me, you know. I won’t say anything.”
Nodding, Ethan took a deep breath. “I think I’m in love with my sister-in-law.”
“Woah.” Riccardo sat back in his chair. “That’s a bombshell. Does your wife know?”
“Not really. She caught us flirting the other day and she’s upset by it. That’s all.”
“And…is there more to it than that?” Riccardo ventured.
Ethan sighed. “Again, not really. We’ve flirted quite a lot lately but it hasn’t gone any further.” He caught Riccardo’s eye and gave a nervous laugh. “No, we haven’t gone THAT far.”
Riccardo raised an eyebrow. “But you want to?”
“I don’t know.” Ethan shrugged. On seeing Riccardo’s eyebrow rise higher, he winced. “Okay, yes. I do. I know it’s wrong and I really do love Hollie and everything, but…” Ethan trailed off, not really knowing what else to say.
“I think I get it. Jared said a lot of people thought you guys married too early so I guess everyone thought this might happen.” Riccardo bit his lip.
“Oh god, this is a mess.” Ethan closed his eyes. “I don’t know what to do.”
For once, Riccardo had nothing to add. Finally, Ethan’s break from Uni work came and he could enjoy the early snowfall in the garden with Jenna. He desperately wanted to put this whole incident behind him but his mind kept wandering back to Daisy and how sexy she was. It wasn’t going to be conducive to a quiet, family Christmas at this rate! With the preparations for Christmas underway, neither Ethan nor Hollie had much time to worry about the state of their relationship. Thankfully, Daisy stayed away from the house so there were no additional arguments. Hollie was still deeply wounded but things felt like they were starting to heal as Ethan busied himself decorating the tree and Hollie got started with the Christmas baking.

Jenna was blissfully oblivious to her parents’ distress and instead was very excited for Father Winter’s visit on Christmas Eve! Christmas ended up being quiet and dignified. The day after, Ethan took Jenna out for the day and Hollie invited her sister round to exchange gifts. She felt awful, feeling so paranoid but she didn’t want to take a chance of Daisy and Ethan being in the same room. Ethan took Jenna out for her first experience of snowboarding; and she loved it! She also adored her new snowsuit. Ethan had picked it up for her because he wanted the family to start having more fun together in the snow. Since Jenna loved playing in the garden so much, it was the perfect gift and it meant she could play in the snow all the more. “I’m sorry for doing this,” Daisy said.
“Hey, no apology necessary! I wanted to see you.” Ethan smiled across the table. “Is everything okay?”
Daisy nodded. “More or less. Gerald thinks I’m visiting you and Hollie.”
“I understand. Hollie thinks I’m studying at the library in Britechester.” Ethan bit his lip. “Daisy, I like you. I really enjoy spending time with you.”
“Me too.” Daisy whispered. “Ethan, I know that what we’re doing is…frowned upon by others but is it really so wrong? I mean, I like you, you like me. If Hollie and Gerald don’t find out, is it really that wrong?”
Ethan felt a wrench in his gut as he considered the question. Every instinct he had was telling him it was wrong and disloyal, yet he couldn’t quite bring himself to disagree with Daisy. “I want to see you more often, Daisy,” he said, deftly dodging the question.
She pulled him into a hug. “I want to see you more often, too.”

Andrea managed to pin a group of them down for a lunch out at Eden, partly in a bid to cheer Hollie up but also because they hadn’t met up in a large group for a while. She’d purposefully not invited Rebecca, since she and Ellie were still fighting.
Throughout the meal, Hollie kept casting sideways glances at Daisy, to see if there was anything on her sister’s face that would give away her feelings but she could read nothing. Sighing, she tried to put her hurt behind her and focused instead on the stories Justina was telling her and Emily about the Simoleon Philharmonic Society. When the house was quiet and Ethan was out at work or a class, Hollie broke down often. The stress was getting to her and she wasn’t sure whether it was her hormones or the hurt caused by the situation. She wondered briefly if she was being silly but she couldn’t be certain. Ethan hadn’t acted any differently since Christmas and she began to think it was all in her head. 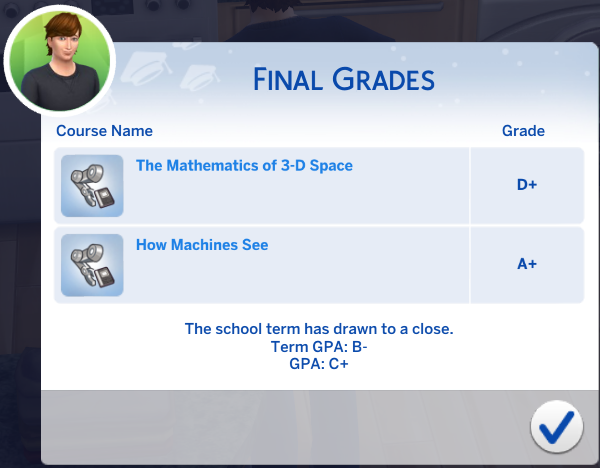 Ethan’s results came in from the previous term; he’d done fairly well and had passed his exams, more or less. He felt quite pleased with himself; in spite of the emotional rollercoaster he was currently on, his results were better than he’d expected.
Breathing a sigh of relief, he knew he had time now to take a bit of a break. It was just as well his classes were finished for a while. Hollie went into labour that evening!

Jareth Richmond was born on the 17th of Winter. Hollie cradled her little bundle and gazed at him with pride. Jenna toddled into the room to meet her new baby brother and Ethan went downstairs to get Hollie a glass of water… …or so she thought.